Recently, a couple of people asked me what would I have done if I were not in the IT industry. Everyone else have an idea what they would want to be, or what other course they would have taken they hadn't chose C&IS or IT.

Now that I think of it, I don't think I ever thought of doing anything else other than this. Actually, even after graduating from Secondary School, I am the only one that was so sure on which degree course that I wanted to take.

You ask why? I tell you why.

It all started with this: The tape recorder was the storage device, ala floppy disk. The TV was the only output (other than the many fond memories) and most of the time we have to write our own games.

So anyway, the Spectrum broke down a lot, but while it was working, it was a fantastic device that helped me greatly with computer programming.

Oh, did I forget to mention that I was 6 years old then?

Anyway, all those quickly moved onto the great AT era (circa Primary School), also known as 80286, with whopping 2MB of RAM, 20MB of HDD, and 5.25" floppies! You should check out my collections of floppies. We had at least 2 full boxes of them. It was truly our first desktop (not in tower form, mind you).

We missed 386s and 486s, and our next one was the all mighty Pentium 60!!! It was touted to be the same processor that went up on the Space Shuttle! We were really psyched when we got this one. It was an Acer Aspire unit, came with Sound Blaster 16 kit set which included a 2x CDROM! Full multimedia man! That was still when the days where everyone was playing *toot* *toot* sounding games using PC Speaker... Anyway, when we got the Acer we were the only family in town with a Pentium! (mind you, was a very small town...)  Too bad I can't find any pictures of it on the Internet.

The Acer went thru numerous upgrades, even lasted me till college. Which is when I got myself a generic Pentium 233 MMX. Justin and me hand pick and built every component from PC Fair. We were surveying for days and almost all the components were bought from different shops! This was our first home brew computer. Luckily everything worked. The default graphics was not satisfying enough (was something from S3), so I saved up for months to get myself a Creative 3D Blaster Banshee!! It's based on the (then) greatest graphics accelerator company's 3dfx's Voodoo Banshee. Taa dah! Here's a picture from Amazon: 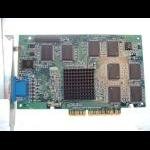 Next was another clone build from Compu-Zone. These were the days when Low Yat Plaza was new, and everyone else is still going to Imbi Plaza. It was a Duron 600 and I remembered when we bought that PC, it was the big Taiwan earthquake, and RAM price was high high high! This PC came with a Samsung 753DF, which IMHO is the best 17" Flat CRT ever made. Basically, the computer is still with me, (albeit a motherboard+CPU change to Athlon 700), acting as my download PC.

So, now do you understand why I don't have a lot of career choice?

Posted by NathenNod at 2:54 PM